Flibbertigibbet: The place to go for absence of Blah!

I love this blog. She doesn’t get hampered up with one style, one way, or one anything. I know. I’m fantasy addict. But it is nice to change it up a bit now and again. And Nymeth is doing just that. She recently posted my Fantasy Challenge on her blog along with some other awesome blogger challenges out there, some of which I must try! And I’m going to keep the ball rolling! GO SEE HER BLOG! DO IT NOW!

Letter from Jericho Jie on marketplace:

It has sadly come to my attention that certain items I created or co-created for Torvalds Forge are being sold again in Second Life by my former business partner Jona Aabye, without my knowledge or consent, in spite of the fact that Torvalds Forge closed down more than a year ago via mutual agreement. It should not have re-opened without the same mutual agreement.

This is why you now can own every Torvalds Forge item I could recover from my deleted account, and have directly worked on. And you can own them for FREE. Torvalds Forge should be dead and gone, but if it isn’t, you should not have to dole out your cash for any of the items that came from my hand.

*** THANK YOU for all the positive comments and encouraging remarks that I have received, and more so, thank you to the over three thousand people who have already downloaded this pack into their inventory. Your downloads mean that revenue is denied to someone who is undeserving of even a single cent of it. You guys have restored my faith in the inhabitants of the Metaverse, and hopefully helped teach a lesson. Cheers! ***

I KNOW RIGHT!??!
A very special thank you to my buddy Nak for bringing this to my attention!

Go get it here.

noun
1.  a preternatural being, commonly believed to be a reanimated corpse, that is said to suck the blood of sleeping persons at night.
2.  (in Eastern European folklore) a corpse, animated by an undeparted soul or demon, that periodically leaves the grave and disturbs the living, until it is exhumed and impaled or burned.
3.  a person who preys ruthlessly upon others; extortionist.
4.  a woman who unscrupulously exploits, ruins, or degrades the men she seduces.
5.  an actress noted for her roles as an unscrupulous seductress: the vampires of the silent movies.
Credits:
______
Skin:  Elena Pale by Laqroki
Hair:  Mylie in Crow by Truth
Gown:  Bordello Gown in Stormy by Ladies Who Lunch
Necklace:  The Raven Necklace Set by League
Pose:   Sexy Pose 10 by Glitterati
Next week:  Ghosts!!!  I want to see you all phantomy!!!! 😀

I’ve always loved seeing the blogger challenges.  I’ve always loved seeing other bloggers and enjoying their photography and their writing styles.  Now, finally, I’ve come up with a challenge of my own!  The name of the game is fantasy!  Of course, this is in honor of the upcoming Fantasy Faire… omg, cannot wait!!!  Each week I will come up with another fantasy creature for you all to put a look together for.  I would love to see any suggestions also!  I’ll give my own take on the creature as well as a good definition of each being.  Time period is completely unimportant.  Your vampire can be from the Dark Ages or a cell phone toting socialite.  The same goes for clothing.  Just because your subject is a fae, doesn’t mean she can’t be an 80’s fiend with shaggy hair and legwarmers!  😀  I want to see what you come up with.  The only rule is to have fun!  I can’t wait to see what you all come up with, and I hope that I get lots of people participating!  I plan to make a flickr group just for this challenge and I hope to see lots of pics and comments! 😀  Have fun!

Our first creature is a fan favorite:  Vampire.   Get all vampy guys!

She hates to see you go but…. 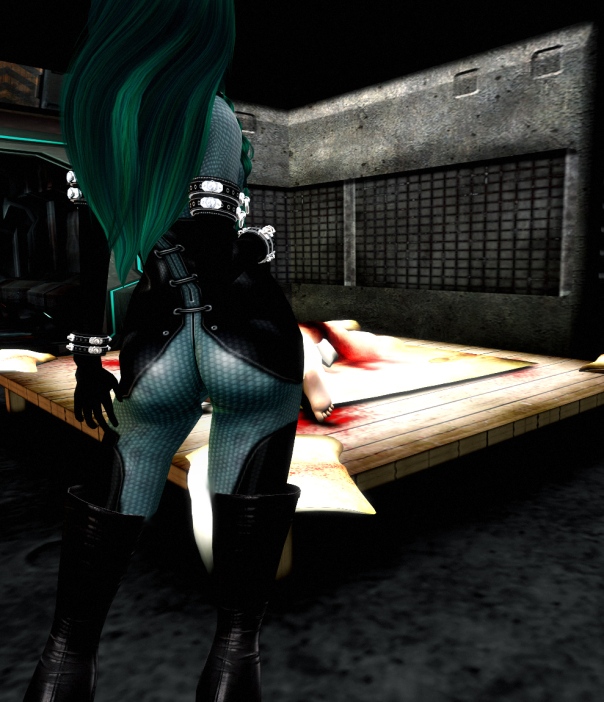 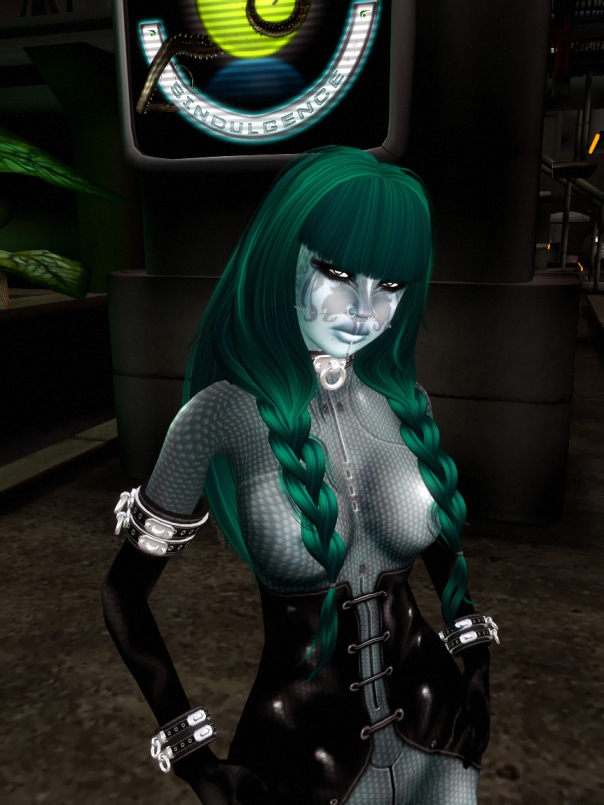 I’ve become totally in love with putting looks together for my rp character in Sector: Sindulgence.  I’ve never much meandered in things latex and robotic, alien and edgy, but I’m really loving the sexy quality of this style.  I’ve blogged this skin before, but this look was so nom that I wanted to share it with ya.  Credits to follow.

Face Tat:  Soul Ink Reloaded Adah by The.Plastik  (every last one of these is completely amazing.  CHECK THEM OUT!) 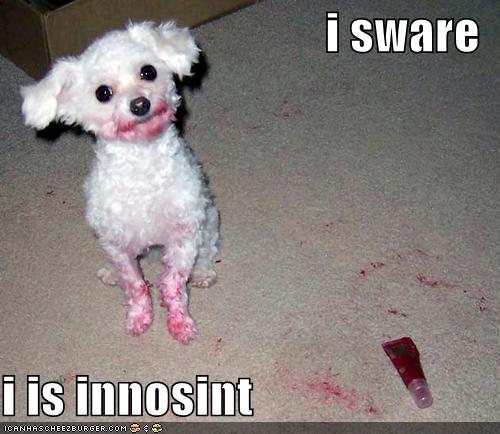 I WISH I was making this up. Unfortunately, I’m not. My precious pup has eaten yet another power cord. I don’t know how long it will take to get one in. While I can post from my desktop and phone, neither of those are capable of running SL. So I can’t get photos or anything. I’ll get the cord in as soon as I possibly can, so hang in there folks. And yes, the dog is okay lol. 😀

OMG.  I can’t wait.  It’s gonna be epic fun.  Mark my words.  I put together a smokin hawt look just for my premiere tromp around the sim.  And thought I would share with ya!  Plus give you a little info about the sim itself!

Skin: Aquamer Clau with Gills in Homicide by The. Plastik

============Story Line============
In an asteroid belt in the Nebula of Pandora you will find Sector: Sindulgence, a place for all that is sinful. But it wasn’t always so. The asteroid was home to a secret Military stop for refueling and weapon exchange.  But…as all the best secrets are lucrative ones, outlaws soon descended upon it and seized the military outpost.  Claiming it as their own, they milked the station dry.

When the dust settled, an entrepreneurial young changeling by the name of Kioko Kumaki saw her chance for greatness ; besides…she had bigger plans for this forsaken rock.  Her rise to power was quick and brutal, snuffing out those who opposed her by enlisting the help of paid mercenaries to fight at her side.  With an entire military station at her disposal, maintaining her position was effortless.  Anyone who wants to keep their asses out of cryo on this station knows the One and Only rule of Sindulgence:  Don’t Fuck With The Boss.

Over time, Kioko built Sindulgence into a “different” kind of outpost.  Instead of fueling ships—Sindulgence began to fuel pleasures, pains, vices, and just about any other fantasy conjured up in the dark alleys of the minds of any species.

Space is a lonely.  But with Sindulgence it doesn’t have to be.  So come and rest your weary feet, and open up to your inner deviant.

When you first land on Sector Sindulgence you will realize that there is still a lot of construction going on, so the look of a old military base is still in abundance. You may also take notice that there is a lot of plant life here.

Traveling merchants approached Mistress Kioko with an offering (a rare plant that breeds lust in even the most abstinent of individuals) in exchange for shelter and protection.  Kioko knew this would be good for business and would make Sindulgence enigmatically popular.  The plant quickly overran the station, but the residents here don’t seem to mind.

A place like Sindulgence isn’t without its own brand of danger.  Even with a comfortably high level of security, the poorer members of the station inhabit the slums, or the depths of station aptly labeled “The Sewers”.  Prostitutes, drug dealers, and many other manner of unsavory individual call these rundown holes ‘home’.  The impact of the rampant poverty is visible all over the station, as crazed drug addicts, or petty criminals have a knack for being destructive.  Gangs also occupy the tunnels and other outlets throughout Sindulgence.  Rats she calls them.  Rats.

And yet—Sindulgence has ‘society’.  High rollers, profiteers, and people of power are clamoring to spend time amongst the things they love most.  Money.  Food.  Sex.  These are the things that Sindulgence has to offer.  Excess and Decadence are two of Mistress Kioko’s -favorite- words.  And those with a fat bank account may find it easier than some to persuade the Boss to turn the other cheek to what sectors within the Prime Colony call ‘questionable deeds.’

============Warning============
THIS IS A MATURE SIM! Adult actions are preformed here! Dark adult actions! To include but not limited too:
Rape
Blood
Cannibalism
Sex
Violence
Cussing
Drugs
Alcohol
If you cringed at any of the above, We suggest you not RP here. This is a FREE FORM RP.  HOWEVER — people have the right to refuse RP that they aren’t comfortable with.  No one can -force- anyone to do anything else.  So, if you want to RP here and don’t want to be raped, we would suggest you put in your profile that you have that limitation.  This is a mature sim, and we expect everyone to act mature.  Griefing, bickering, or any other disruptive behavior can get you banned.  This is a community, and we’re all adults—so let’s act like it.

Check out Sector: Sindulgence for yourself here.

I Luz You Guys. 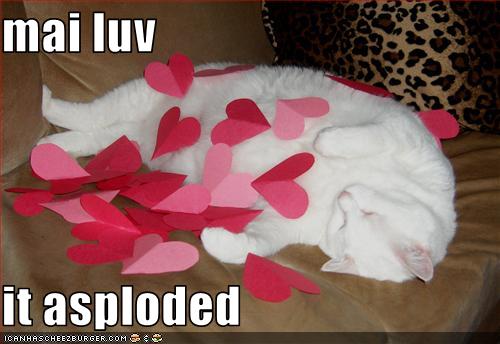 An exploration of fashion design in a virtual world

Bringing You SL Fashion since 2012

Your blog into all types of fashion and props!

A monthly Shopping-Event for Role-players

What *IS* Willis Talking About?

A Full-blooded Woman Dreaming With the Power Just to Be

A RFL of SL Event

just a sl blog full of a sauce made of awesome.

Where great fashion comes with a story.